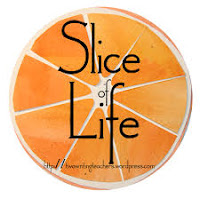 "I don't quite get what you're trying to say," the fourth grade student said after his first grade buddy had tried to explain the feedback he was giving on his partner's writing.

I knew they were supposed be talking about the content of the opinion pieces they had written after a debate on whether Lilly, the main character in Lilly's Purple Plastic Purse was a good role model. They had done that.  I sat with my body turned to the side, eyes looking away from the pair, and waited. I didn't jump in to interrupt. I didn't ask clarifying questions. I didn't try to redirect the conversation. I didn't say a word. I just waited.

"Well, like right here" the first grader continued on, turning to the last page of his partner's writing. "See here...when you read that to me," pointing to Thank you , "you read it like an exclamation point but you put a period there."

"Oohh, I get what you mean. You think I should have used different punctuation, right?"

"Yeah," and to further make his point, the first grader turned back to the first page, pointing to a certain place, "And right here, I said it sounds like a question but there isn't a question mark. That's what I was trying to tell you."

The fourth grader nodded in agreement. "Yeah, well, I'm really not that great at punctuation."

Silence. I turned slightly to see what was happening. They were looking at each other in awkward silence.  I continued to wait.  After about a minute, the brave first grader pressed on.

"Well, you could fix it now," the first grader tentatively suggested.

"Oh. Yeah. Sure." The fourth grader picked up his pencil and added the question mark.

With growing confidence, the first grader continued "I'm really good at punctuation. Do you want me to help you fix some more?"

And then I watched as the two diligently worked through the fourth grader's piece.

As I thought about that exchange on my drive home I knew I had been witness to some amazing editing work. Yes. It was exactly that. Amazing.  But it was more than that for myself and the classroom teachers of these two young writers. It was an important reminder of the ways kids can be the "lead" learner when we're willing to step back. Step back and wait.
Posted by LiteracyDocent at 5:00 AM