A Book A Day Challenge

Anyone who knows me, I mean really knows me, knows that I love a good challenge!  I don't always have to be successful at the challenge...although it's nice...but trying to conquer something really motivates me.   I make all kinds of  'challenges' with myself.  Since moving from the kindergarten classroom three years ago, I always feel like I am  playing catch up when it comes to being well read for the fourth/fifth grade classroom.   So when I received Donalyn Miller's latest blog post in my inbox, I was more than excited!  I won't go into the benefits of helping your students make summer reading plans. Donalyn does that superbly in her post and I couldn't agree more!   I am a firm believer that modeling for your students is key so as I help my students make plans for their reading this summer, I plan on rising to the challenge of reading a book a day this summer...and blogging about what I am reading.  My plan is to tackle some the Newbery Award titles I haven't read, keep up with the latest 2010 publications, and really focus on some graphic novels (a blog post about my recent learning on that subject is in the works) that I will be using to teach comprehension strategies with my fifth graders next year.  You can view my TBR shelf here.   It's not too late to join the challenge...blogging isn't required!  You can read picture books, middle reader/YA books, professional books, or adult books.  It really doesn't matter...the point is to read!  Did I mention I am also challenging myself to write  everyday this summer?  More about that to come.  Told you I love a challenge!  Here is my first contribution to the Book A Day Challenge! 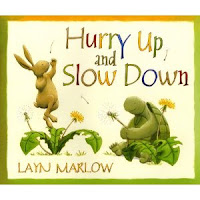 Jacket Description (from The Book Maven's copy)  As Hare races through the day, poor Tortoise can barely keep up.  But when it's time to bounce into bed, Hare is no longer in such a hurry.  What could possibly make Hare want to hurry up, then slow down?  Some things just are not meant to be rushed.

Children who are familiar with the classic fable The Tortoise and the Hare will see the same characteristics in the two friends in this whimsically illustrated picture book by Layn Marlow.  A story that highlights the differences between the energetic Hare and the more cautious Tortoise made me smile as I thought of the parallels to children I have had the pleasure of working with over the years.   The illustrations are very kid friendly with terrific details. I love the message the ending brings...to slow down and enjoy the experience of reading together.   With limited text on each page, Marlow manages to tell a simple, solid story with extremely different, yet very likable characters. This book makes a wonderful read aloud or bedtime story.  It could also be used with older children as a mentor text for teaching dialogue or could be written as a Reader's Theater script for fluency practice.
Posted by LiteracyDocent at 7:04 PM 4 comments: 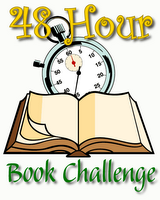 My official end time for Mother Reader's 48 Hour Book Challenge was 6:30 p.m. EST this evening. Even though 'life' got in the way today and seriously impacted my reading time, I stand at the finish line feeling pretty good about what I accomplished!  I was able to knock 4 more titles from the 2010-2011 Maine Student Book Award list off the TBR list and listen to 2 CDs of another.  My finished pile also includes two 2010 copyright titles and one older (but new to me) title.  Of course I can't neglect to mention the fun I had reading/commenting on other participants blogs!  All in all, not a bad first time out for this newbie!


Here are my final totals:

Time spent reading:  19 hours
Time spent blogging/commenting: 4 hours 30 minutes
Total time spent on Challenge:  23 hours 30 minutes
Books read: Killer Pizza, The Chosen One, Each Little Bird That Sings, Alive in the Killing Fields, The Blue Shoe, The Birthday Ball, 2 CDs of The Indigo Notebook and 147 pages in A Nest for Celeste
It's been fun!  Thanks to those who stopped by to cheer me on!  I hope you will continue to visit!  And a huge thank you to Mother Reader for all the hard work you put in to hosting and making this Challenge a success!

Posted by LiteracyDocent at 7:54 PM 5 comments:

6:30 p.m. EST was the 24 hour mark for my participation in Mother Reader's 48 Hour Book Challenge.  I haven't knocked off as many books I had hoped by now but will continue to plug away.  I finished Each Little Bird That Sings by Deborah Wiles, Alive in the Killing Fields: Surviving the Khmer Rouge Genocide by Nawuth Keat and Martha E. Kendall, and The Blue Shoe: A Tale of Thievery, Villainy, Sorcery, and Shoes by Roderick Towney.   I also listened to one CD of The Indigo Notebook by Laura Resau while running some errands today.
So here are my stats so far:
Time started:  6:30 p.m. Friday
Time now: 7:41 p.m. Saturday
Total pages read:  1,056 (listened to 1 CD)
Time spent reading:  15 hours
Time spent blogging/commenting: 2 hours 30 minutes
Books read: 5
Currently reading:  The Birthday Ball by Lois Lowry
On deck:  As Easy as Falling Off the Face of the Earth by Lynne Rae Perkins
Posted by LiteracyDocent at 7:51 PM 2 comments:

I have been reading for 4 hours and 30 minutes so far as a part of Mother Reader's 48 Hour Book Challenge.

Finished Killer Pizza by Greg Taylor two hours in.  While not my usual genre of choice it was in my pile because it is on the 2010-2011 Maine Student Book Award list.  In his debut novel Taylor provides some fantastical horror that fifth-eighth graders will love.  Fifteen year old Toby Magill , a Top Chef want-to-be, gets a summer job at a new pizza joint in town, Killer Pizza. Hoping to learn some cooking skills, Toby believes  his new position will lead to bigger things but soon discovers that the establishment is actually a front for a secret monster-hunting organization, and he, along with two co-workers,  are the newest recruits. Their job shifts from making pizza to weapons training and stakeouts as they try to uncover the leader of a pack of grotesque monsters that can transform into human shape and are preying on innocent people.  I have to say, I did end up really liking this story...even though I started reading kicking and screaming!   I can see the book drawing in those reluctant readers in grades 6 through 8.

I also started and finished The Chosen One by Carol Lynch Williams, another title on the 2010-2011 Maine Student Book Award List.  (Description from the book jacket) Thirteen-year-old Kyra has grown up in an isolated community without questioning the fact that her father has three wives and she has twenty brothers and sisters, with two more on the way. That is, without questioning them much---if you don’t count her secret visits to the Mobile Library on Wheels to read forbidden books, or her meetings with Joshua, the boy she hopes to choose for herself instead of having a man chosen for her.  But when the Prophet decrees that she must marry her sixty-year-old uncle---who already has six wives--- Kyra must make a desperate choice in the face of violence and her own fears of losing her family forever.
While I found this book to be an extremely well written, riveting read, because of its' content, I don't think this was a good selection for a 4th-8th grade reading list. I won't be including in my classroom library but I am glad I read it and would definitely recommend it to students in grades 9-12.
So here are my stats so far:
Time started:  6:30 p.m.
Time now: 11:30 p.m.
Total pages read:  427
Time spent reading:  4 hours 30 minutes
Time spent blogging/commenting: 45 minutes
Books read: 2
Currently reading:  About to start Each Little Bird That Sings by Deborah Wiles
Posted by LiteracyDocent at 11:45 PM 3 comments:

And so the challenge begins...as soon as I finish this post. My official start time will be 6:30 p.m.   I am really excited to be participating in Mother Reader's 48 Book Challenge.  I listed my books yesterday but have made a few adjustments.  A couple of my titles didn't come in to my public library yet.  I also added two titles just in case a book isn't holding my interest.  Not pictured are The Indigo Notebook by Laura Resau and A Season of Gifts by Richard Peck which are both on audio in my car so I keep "reading" while running errands tomorrow or Sunday!  I will be back around 10:30ish to blog about my progress!  Wish me luck as I work my way through this pile! 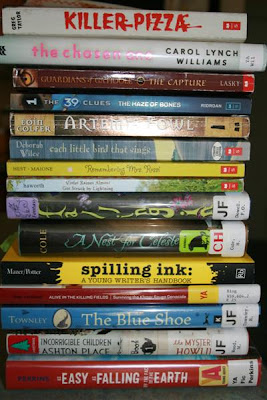 Posted by LiteracyDocent at 6:26 PM 4 comments:

With the school year winding down, I am looking forward to a relaxing summer, which of course I hope will include lots of reading!    I have a very large To Be Read (TBR) shelf that I am hoping to make a dent in!  I came across Mother Reader's 48 Hour Book Challenge a few weeks ago and thought it would be the perfect time to get started.   I have been wanting to participate in something like this for a few years and have learned that there is no "good time" so I am just jumping in with both feet and will see what happens!  My plan is to start tomorrow evening at 6:00 p.m.  and end on Sunday evening at 6:00 p.m.  I know there will be some interruptions...I mean I will need to sleep and eat at least!

Here are the books I plan to tackle  during the Book Challenge:

The Chosen One by Carol Lynch Williams
The Birthday Ball by Lois Lowry
Spilling Ink: A Young Writer's Handbook by Ellen Potter and Anne Mazer
Killer Pizza by Greg Taylor
The Blue Shoe: A Tale of Thievery, Villiany, Sorcery, and Shoes by Rodrick Townley
The Indigo Notebook by Laura Resau
A Nest for Celeste: A Story About Art, Inspiration, and the Meaning of Home by Henry Cole
As Easy As Falling Off the Face of the Earth by Lynne Rae Perkins
Countdown by Deborah Wiles
Alive in the Killing Fields: Surviving Khmer Rouge Genocide by Nawuth Keat and Martha Kendall
Each Little Bird That Sings by Deborah Wiles
The Capture by Kathryn Lasky
Artemis Fowl #1 by Eoin Colfer
A Season of Gifts by Richard Peck
The Mysterious Howling (The Incorrigible Children of Ashton Place) by Maryrose Wood

That's 15 books I hope to move from the TBR pile to the READ pile this weekend!  Have you read any of the books on my list?  Do you have a title you think I just have to add?  I would love to hear from you!
Posted by LiteracyDocent at 4:58 PM No comments: